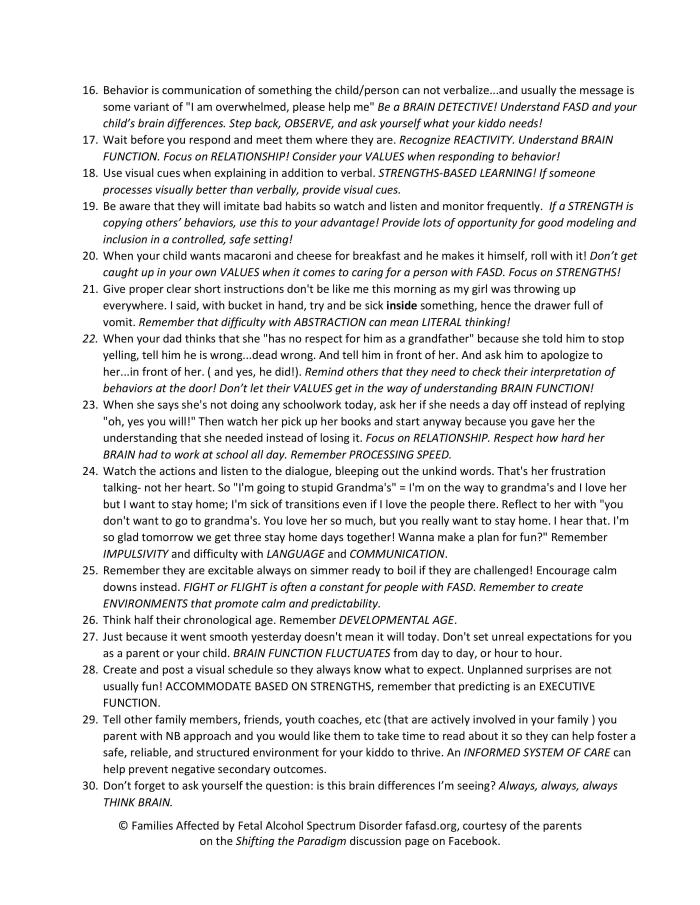 There’s a boy in our neighborhood who is half my daughter’s chronological age and lives a few houses down. He and our daughter occasionally play outside together when my husband or I are working in the yard and can keep an eye on them. He’s about four-and-a-half and she’s nine, but since she is living with FAS, they are in the same place developmentally— still building essential social skills such as compromising, learning to take turns, and sharing favorite toys. In many ways, they are great playmates.

The other day, my daughter asked if we could invite this friend over to play inside our house. Knowing that she’s been eager to have a friend over, with infrequent opportunities to do so, I agreed and set it up with his mom. Before our young neighbor arrived, my daughter and I talked about how to be a good host when a friend comes to visit. She enthusiastically provided her own ideas on what this might look like and how she would make him feel welcome.

She could hardly contain her excitement.

Despite all of this, the moment he arrived (right on time and excited to play), she ran and hid from him behind a couch. He and I tried to get her to come out from her hiding spot, but she stayed there, growling at him like a dog and hissing like a cat.

My heart breaks for her in these types of moments (and there are plenty of them), knowing that the impact of her actions, and how they affect a blossoming friendship she so desperately craves, is completely lost on her. Knowing that she is extremely social, and wants nothing more than to have true friends like her older “neurotypical” brother, but watching her struggle with the basics of how to be a friend— even with patient coaching and encouragement in advance— is unbelievably sad for me as her mom.

In my work with many other parents of children impacted by FASD, and through my own parenting experience, I’ve come to believe that one of the most difficult aspects of watching our children with FASD grow older is to see the heartbreak that comes with trying to make, relate to, and keep friends. While it’s certainly true that the social complexities any child faces growing up will deliver a measure of heart-breaking moments, this feels different. This is a profound, lingering heartbreak that runs deep because it’s about more than just the situation at hand— the most recent drama with the friend at school or the hurt feelings from something uttered on the playground. This heartbreak is about witnessing, repeatedly, the growing pains that come with having a child whose brain works differently, the sort of difference that renders establishing and maintaining successful, authentic friendships incredibly challenging.

I hear different versions of this heart-breaking story from nearly everyone I work with: parents and family members raising children with FASD, as well as adults living with FASD who speak to the social isolation they often experience.

It might be the high schooler with FASD who engages in risky behavior with a new peer group they want to impress, but lacks a clear understanding of the consequences of their actions.

The way in which this same high schooler has a “falling out” with a new friend each week, but can’t identify why this keeps happening.

It might be an adult with FASD who isolates in their room all day, reducing their social interactions to online “friends,” but has only minimal understanding of the wide-reaching ramifications of social media interactions with “friends” who are complete strangers.

Or the middle schooler who is seen as “immature,” playing too rough on the playground, talking about toys and movies intended for much younger children, dominating conversations without self-awareness, alienating herself by talking too loudly and too frequently.

The ten-year-old that is acting “silly” in a desperate attempt to fit in and be funny, but is seen by classmates as the kid who “ruins everything.”

And the twelve-year-old who still requires nearly constant adult supervision to be safe and doesn’t understand why he can’t ride down to the park by himself, like all the other 12-year-olds in the neighborhood.

We know that individuals with FASD have brains that work differently, and sometimes we can see this clearly in delayed and halted speech, lack of executive functioning skills, poor impulse control and environmental sensitivity which frequently results in sensory overload.

Difficulty forming relationships can certainly be due to poor impulse control (I want, so I grab or steal; that’s mine, so I take without asking; he’s in my way, so I push to get him out of my way), inability to abstract (a struggle to “put yourself in someone else’s shoes” or read social cues) or inability to see consequences of actions. What we don’t hear discussed as often is how a brain that did not have the opportunity to develop “on-time” struggles just as significantly with relationships and social interactions as it does do with various other primary characteristics due to dysmaturity.

Dysmaturity— where a gap exists between the developmental age and the chronological age of an individual— is a primary characteristic of FASD. I believe it is foundational to our understanding of individuals with this diagnosis, setting the stage for all the other primary characteristics to follow. It is not uncommon for individuals with FASD to be, developmentally, half their chronological age, which has profound ramifications for that individual when it comes to making and maintaining friendships. It’s not difficult to imagine the ways in which a child with dysmaturity would struggle within peer groups. Since society almost always groups children by age for school and other activities, the environments through which children with FASD move highlight this difference in ever more painful ways.

I’ve also found that dysmaturity is the primary characteristic that’s commonly most difficult for parents to fully and consistently integrate into a new understanding of their child, and, as a result, this aspect of FASD is frequently minimized or left completely unrecognized. For this reason, I often begin processing a situation that has occurred with a child by asking, “How old is he (or she) developmentally?” Asking this simple question lays the foundation and brings the dysmaturity to the forefront. It’s often not until we truly begin to dissect specific situations parents have encountered with their child that the full impact of dysmaturity on their child’s life comes into full focus.

And even with an awareness of dysmaturity, the reality of its impact is still difficult to accept. It can be largely invisible. Sometimes, it’s not until a younger, “neurotypical” sibling begins to surpass an older child with FASD in areas of social and emotional maturity that the reality finally hits. Other times, it is a slowly unfolding awareness, prompted by the question, “What age does that action remind you of?” when reflecting on a child’s behavior.

Once this awareness is present, other understandable, tough questions come next:

If my child is half their age developmentally, what does this mean for their future?

What does this mean for my future, as their parent?

Will my child ever be able to find a place or community where they “fit in?”

Will they ever “catch up,” or does the developmental gap remain?

It can be difficult to remain in the moment as a parent when such heavy, difficult questions about the present and future remain unanswered. But there are things we can do as parents, in the present moment, to work within, rather than against, the limitations of dysmaturity.

When that young neighbor came over to play with our daughter, only to have her growl from behind the couch, I didn’t call off the play date, lecture her or launch into potential consequences. I focused on keeping my own frustration, disappointment, and anxiety in check. I remained calm and supportive, reminding my daughter that her friend was there just for her, hoping to have fun with her.

When she eventually emerged from her hiding spot, after a great deal of regulated support from me, we shifted into playing with her friend. I supervised nearby, to ensure things were off to a good start (that she was regulated again). When I was confident of this, I continued to observe from a distance in order to assist with negotiating tricky social situations as they arose. I was attentive to the ways in which, from that point forward, she was a good host to her friend, so I could be sure to recognize and point out those things later.

Afterward, I made a point to speak with her friend’s mother about what had occurred, so that the mom might better understand my daughter when dysmaturity inevitably came up again in the relationship. I was mindful of my inclination to feel shame and embarrassment, and, while acknowledging these feelings creeping in, tried to avoid letting them overwhelm me. I didn’t apologize for my daughter’s disability, but simply provided context to our neighbor for deeper understanding.

Finally, later that night when my daughter was ready for bed and snuggled up to me after reading a book, I circled back to remind her of the things she did well while her friend was over and how proud we were of her resilience. We also discussed things we might consider doing differently the next time, and why. I resisted the urge to rush through this conversation, and instead focused on speaking slowly, giving time to process, providing context, and walking through how her friend might have felt at the moment she was growling and hissing at him.

Like many parents of children with brain differences, I’m continuously working to accept the need to re-teach and engage the circling process, again and again, knowing that a slightly different variation of this situation will inevitably arise, because that’s what happens with a 9-year-old child who lives in the world as a 4-year-old developmentally.

Where FASD is concerned, there is an ever-so-slow maturation process, one that sometimes moves so glacially we don’t even believe it’s happening. And then, every once in a while, it’s as if the needle shifts seismically, in a way that shows real progress. We get that glimpse of our child’s ability to think of a friend before themselves. Or our child comes to us when they’re upset by a friend’s comment, instead of reacting impulsively, in word or action, towards the friend. Another reminder that they are not acting immaturely, they are actually a younger age developmentally. Success hinges, not only on understanding this, but internalizing and practicing responses that arise from a neurobehavioral, brain-based perspective.

Here is the first issue of our TFM Newsletter – short but full of helpful content for parents of children from Hard Places (even a hard as FASD!).  You can sign up on this website – go to the Contact/Newsletter tab to sign up and get it via e-mail.  Here is the link below for May.May – go to: http://mailchi.mp/050c0532b9b1/may-2018-tfm-newsletter 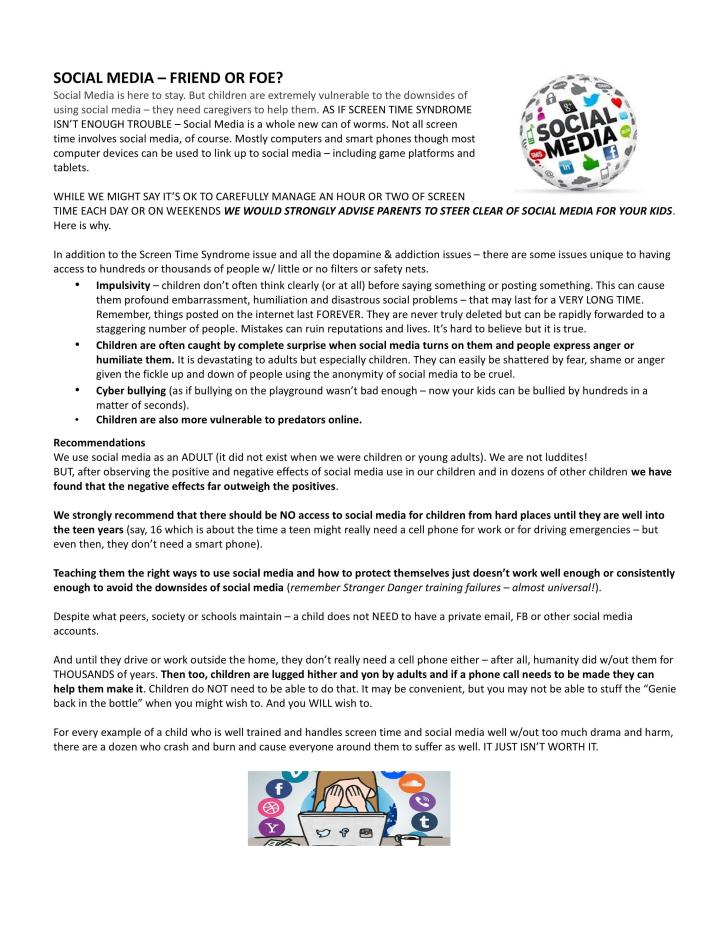